If any team at any time at any moment needed some sort of spark, it is the Oakland Athletics and the near-suicidal state of their offense.

Having put up one run in their past 31 innings of play and on a four-game skid, the start to September literally couldn’t have gone anywhere but up for the A’s.

Yesterday it did, right after the acquisition of Adam Dunn who made his presence felt in his first at-bat at his first time at the O.Co Coliseum when he banged a 1-1 changeup off Chris Young for his 461st home run and first with the Green and Gold. They went on to score five runs in the first inning and rode the adrenaline of the sold-out Labor Day crowd to a 6-1 victory over the Mariners.

He ended up 2-3 on the day with 2 RBI and a run scored, but in the bigger scheme of things, he seemed to emotionally lift an offense in desperate need of anything positive.

The only problem with his home run was adjusting his 6’6” frame to the A’s “Tunnel Run” after every home run. “Yeah, he’s got to do a little bit of bending to get through it,” Josh Reddick said after the game. “But I think we’ll take that. Come out of the gate and do what he did, it’s huge.” 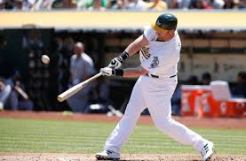 Since the Trade Deadline, the A’s have gone from scoring over 5 runs a game to under 3.5 and perhaps Dunn can be the answer.

Now I’m definitely not saying he’s going to go back to be the Adam Dunn of old who had five consecutive 40+ home run seasons, but I’ll tell you why I think he could have a significant impact, despite being a “past-his-prime slugger” who is third all-time in strikeouts.

1) He will only face Right-Handed Pitching

Dunn hits a career 30 points better and has 300+ more home runs against righties than lefties, which is why Bob Melvin will only use him against such. Although the A’s now have another platoon option (in the way they got Jonny Gomes and Sam Fuld), this one is different as he has proven power that might actually be able to drive in runs.

There’s something to be said for motivation in baseball, and Dunn has it. A man that has never even been close to making the playoffs now has that opportunity to do so and, more importantly, has the ability to influence that opportunity. “I can speak pretty passionately about it; these chances don’t come around very often, especially for some of us,” Dunn said after his first game. “We’re going to take full advantage.” A man speaking like that is motivated to doing anything and everything he can to help his team play to the best of their ability, which is the exact opposite of what Oakland did in the month of August. 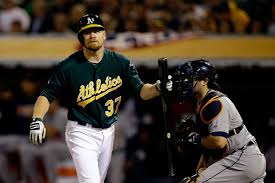 This is probably the most important part of Dunn coming to the East Bay. One of the biggest reasons for the A’s offensive woes has NOT actually been Cespdes leaving (I know that sounds crazy). The problem is the hitters putting too much pressure on themselves in order to try to fill that void. When a player of Cespedes’ caliber just leaves the lineup, someone doesn’t necessarily need to step up to “replace” him. Before the All-Star break, a guy like Brandon Moss had better numbers than his Cuban teammate and did it very quietly. Since then, I believe the pressure to do more has fallen hard on his shoulders and as a result he’s struggled. Since the July 18th break, Moss is hitting an abysmal .178 with only two home runs and 51 strikeouts in 129 at-bats. Now obviously he has regressed, but I think the presence of Adam Dunn can get him back on track, because he will now not be forced to TRY and do it all.

Oh yeah, and by the way, if Dunn hitting a jimmy in his first at-bat with Oakland wasn’t a sign that September could be much different than August for the A’s, how about Jason Hammel (the nicknamed “New Jim Johnson”) throwing 8 innings of 3-hit ball in the same game.