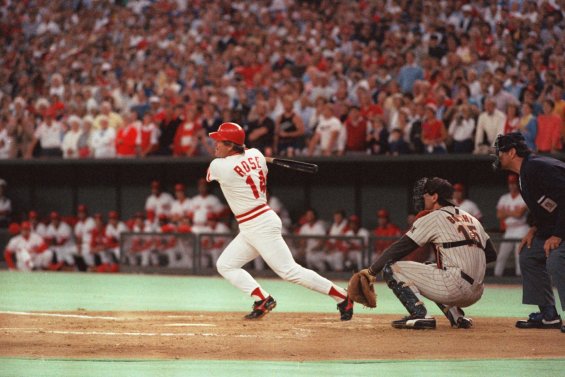 As many of you know in 2004, the all-time hits leader Pete Rose admitted after 15 long and dismissing years, that he did in fact bet on baseball, but he insisted it was only as a manager. Earlier this week, information revealed by Outside the Lines showed that Rose bet repeatedly on baseball towards the end of his career as a player-manager for the Cincinnati Reds. The reports specifically revealed that Rose placed bets on 30 different days regarding MLB games, 21 of those being placed on his Cincinnati Reds.

Caught red-handed, after constantly denying he bet on games as a player for the past 26 years, many believe that Rose should never be allowed into the Major League Baseball Hall of Fame. As John Dowd, the former federal prosecutor who led MLB’s investigation said, “This does it. This closes the door.”

I would argue differently.

To me, what Pete Rose did off the field should hold no consequence in terms of his induction into the ‘Baseball Hall of Fame,’ the reason being the first word there, ‘Baseball.’ The voters who decide which members of our National Pastime enter the halls of Cooperstown need to address their misguided sense of moral obligation. Who deserves to be a Hall of Famer? This is the question proposed, rather than the question I feel is similar, but more appropriate. Who should be a Hall of Famer? Differentiating deserves and should separates a players character flaws (which let’s be honest, everyone has) from their actual ability to play the game of baseball. Sure, Pete Rose off the field may not have brought much positive attention to himself, but in between the chalk, you’d be insane to think he’s anything but great. Not just the fact that he has more hits than anyone else – a record I personally don’t think will ever be broken – but he embodied the way one should play the game: Hard.

You cannot argue that he is one of the greatest players to ever put on cleats and that is where his Hall of Fame argument should end. This idea that Hall of Fame voters are only trying to put ‘clean’ guys in Cooperstown is simply unreasonable. In fact, the Hall already has ‘unclean’ guys inside, especially by today’s standards. Besides Ty Cobb, who always gets mentioned in this argument because of his sociopath-like attitude, there’s also a more glaring one. How about the long-time Red Sox and Indians Centerfielder, Tris Speaker who was implicated in a game-fixing scheme, which nowadays is more than a good enough reason to keep him out. Not to mention the rumor that both Cobb and Speaker were members of the Ku Klux Klan.

Plus, I can tell you right now that if Pete Rose put money down on the 1972 World Series when they played the Athletics, I wouldn’t blame him. That ’72 Reds offense was stacked and if not for an A’s pitching staff that held a cumulative 2.58 ERA to stifle Cincinnati’s firepower, they probably would’ve won. I get it’s about the deceit and dishonesty of his actions, but that had nothing to do with his approach to the game. If he ever threw a game, I would see him as guilty, but Rose was the toughest type of competitor. He would never give in on or off the field, which to me is an admirable quality.

Also, even NFL has a gambler amongst their Hall of Fame ranks. Former-MVP Paul Hornung was suspended from football in the early 60’s after he was found betting on NFL games. This was a guy who played for the Vince Lombardi Green Bay Packers who epitomized excellence and he tainted it. However, once he served his penance – a one-year ban – he came back and was eventually voted into the Hall of Fame in the class of 1986. If the NFL can get over it, why not the MLB?

Finally, the intention of the Hall of Fame voting committee to keep Rose out of his rightful place is, in essence, futile. The reason being The National Baseball Museum that rests side by side with the Hall of Fame in Cooperstown, NY. This museum is given the responsibility of holding the entire history of baseball, originally founded in 1869. Inside are memorabilia, murals, and most importantly, records. Pete Rose’s impact on the game lays within the Museum through his contribution to The Big Red Machine that tore up the 70’s along with his iconic #14 jersey. So to refuse Pete Rose admission to the Hall of Fame is just the voters denying the history of baseball one of its largest pieces.